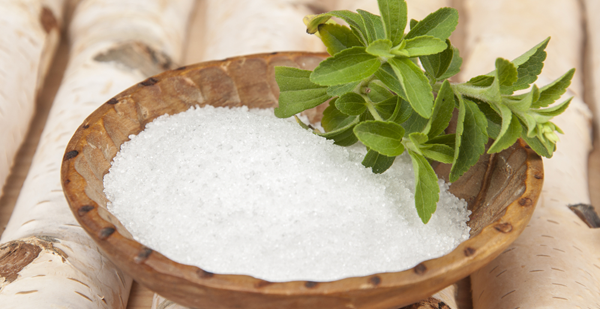 Birch sugar, also known as xylit, xylitol or xucker, is a sugar alcohol used as a sugar substitute. The chemical name is pentanpentol or E 967. Birch sugar occurs in nature in various fruits and vegetables, as well as in mushrooms. Cauliflower, strawberries, raspberries and plums are these natural xylitol sources found. As the name Birch sugar already says, xylitol also occurs in large quantities in the bark of birch and beech. However, it is hardly produced this way today. But the birch sap is still won directly by the birch. Birch sugar is an endogenous substance in humans because it is produced in small quantities in the liver during the breakdown of carbohydrates.

Facts about birch sugar
Birch sugar gained notoriety mainly through his reputation as a caries prophylaxis. Birch sugar is used in dental and oral care products as xylitol toothpaste, mouthwash or for cleaning dentures, braces, etc.

However, as the sweetness of birch sugar is close to that of table sugar (sucrose) - 98%, but with far fewer calories (1 gram of sucrose = 4 calories, 1 gram of xylitol = 2.4 calories), it will always cook and bake with more use. Also, various foods with xylitol, e.g. Chocolate, chewing gum or sweets are increasing popularity. Since less insulin is required for the metabolism of xylitol than for table sugar, the sugar substitute is also well suited for diabetics.

Is Birch sugar really healthy?
Birch sugar or xylitol are attributed to properties that play an important role in tooth decay, obesity and diabetes. By u.a. two Finnish studies, the caries reducing effect has been evidently proved. Quoting the study as xylitol ensures the death of caries-causing bacteria and reduces the acidification of plaque. The fact that xylithmaceutical chewing gum reduces the risk of caries during pregnancy was also investigated. Therefore, chewing gum, candy, toothpaste and mouth rinses etc. are mixed with xylitol and contribute to the maintenance of tooth mineralization. Although it has often been suggested that birch sugar directly and clearly prevents tooth decay (Consumer Advice Center Bavaria: "Caries Preventive Effect", EFSA and Xylitol Chewing Gum in Children), these statements still do not appear to be officially recognized.

Birch sugar, however, also ensures that the blood sugar level increases less than with the consumption of sugar, since, when eating almost no insulin must be distributed, in contrast to the consumption of table sugar. When sucrose is added, blood sugar and insulin levels skyrocket. If the blood sugar level is permanently increased, more and more insulin must be produced. Often one reads then of the diagnosis diabetes type 2 - official documents we found none for this. In addition, a high insulin level causes many to feel hungry, which can be the reason for obesity in the long term. So even in this case, the birch sugar scores and can definitely be recommended. It also does not cause cancer as some people mistakenly think.

Are there side effects when eating this sugar substitute?
So far, there are no known harmful side effects. There is no scientific evidence to support allegations that birch sugar is carcinogenic (an effect that is also said to normal household sugar).

However, care should be taken to increase consumption slowly, as birch sugar may be laxative in the initial phase and too high in consumption. This is especially important when xylitol, e.g. used to bake cakes, which is also eaten by children. A daily dose of 150 g should not be exceeded by an adult, in children it is 40 g.

It is also important that pets do not get birch sugar. They lack a liver enzyme to break down, and a high level of insulin secretion is achieved, which lowers blood sugar levels. For a dog, 5 grams of birch sugar is a lethal dose.

Production of birch sugar:
The classic birch sugar production has been known for over 100 years. In Finland, the sugar substitute has been used since World War II. From plant fibers of birch wood, but also straw, and nowadays mainly corncobs, wood sugar (xylose) is obtained. The wood sugar can not be digested by humans, so a complex, chemical process is necessary to make birch sugar from it. Due to the expense of production, birch sugar is a lot more expensive than normal household sugar.

In order to meet the demand for the birch sugar purchase, a possibility has now been developed to produce it from glucose. While this process is simpler and cheaper for the manufacturer, it is not necessarily more advantageous for the consumer. The reason is the following: Glucose requires cornstarch. However, this maize starch can also be obtained from genetically modified maize, although the proportion of GM maize within the EU is still relatively low, unlike the US. The required enzymes are also obtained mainly from genetically modified microorganisms. Therefore, it is very important to pay attention to the manufacturer, not only to the price of birch sugar.